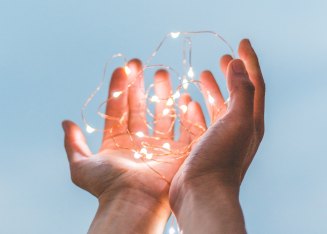 After thinking about a short piece for a long time, which I envisioned being called “10 Things 10 Years After Your Brother Dies,” over the summer I finally wrote it and Modern Loss — a platform I appreciate so much — published it. I loved working with Gabi Birkner, a compassionate, smart, and intuitive editor who saw the bigger picture in my words and aptly re-titled it “Having a Dead Sibling is Full of Contradictions.” The listicle was the first thing I’d ever intentionally written in second person, with the hopes of having readers insert themselves into the narrative, and boy did they.

In dozens of comments on the site and on social media shares, I watched as others who had lost siblings related to the things I shared: Wow, this really resonates with me. I thought I was crazy. So spot on. Each note made my heart swell. I guess I hit the right balance of personal and universal in the writing, and I watched in awe as the Facebook shares through the page ticked up and up and up. As of this writing, that number is more than 9 thousand, which for me feels like 9 zillion.

Those kind readers started following my blog and social media accounts, and one night, an editor from SELF magazine sent me a message through Twitter complimenting the piece and asking whether she could interview me for an article she was writing about grief. Me? I practically had to pinch myself.

The following week, I had a wonderful phone conversation with Senior Health Editor Patia Braithwaite, and figured maybe she’d use a line or two. I was just so flattered she felt I was worth talking to, and enjoyed having an opportunity to get up on my soapbox about sibling loss. Then I was wowed again when the article came out because she shared my story at the beginning for four paragraphs, linked to the Modern Loss piece, and quoted me at the very end, despite the fact that the rest of her piece was full of actual, knowledgable people like doctors and professors.

When I started grad school in 2014, I never though that the story of dealing with my brother’s death would mean anything to anyone else. I just knew I had to write it for myself — to get my own brain around this terrible thing that happened — and with that in mind, I turned the pain of losing David into my thesis work. Through the gift of my first writing retreat in January of this year, I finally managed to finalize a full draft of a real manuscript.

The validation through the Modern Loss and SELF publications pushed me to take advantage of that momentum, and get my shit together. I finally completed the book proposal I started in April of 2018 and began the scary and arduous task of querying literary agents. Though MFA students and professors had given me the reassurance I needed just to write what I’d been through, these public acknowledgements gave me the confidence that maybe my story could mean something to someone else. An agent has the manuscript now, and my fingers are crossed. The mere fact that someone asked for it is enough fuel to keep me motivated for a long time.

Just a couple of days ago, a journal on Twitter asked, “Name an editor who made your 2019 special.” Without a moment’s hesitation, I added Gabi’s Twitter handle to the thread, and in little time she responded so generously: “OMG, thank you. I was just thinking about your piece — and how important you were in giving voice to sibling grief.” Heart emojis abound. (I just went back to Twitter and tagged Patia, too! Because, duh.)

There is a lot of vulnerability involved in writing about yourself and even showing it to others. There is a lot of rejection in trying to publish anything. There are countless moments of impostor syndrome and questioning. Am I good enough? Who do I think I am? Why bother? It’s so hard! There are tears and sleepless nights. It almost never makes any money. It takes time and energy away from other things and people you love. Those people might not like how you write about them. You might get terrible, judgy comments instead of the nice ones.

But before tackling this work, I felt isolated and sad, confused and unmoored. Doing the job helps me see myself, my brother, and the larger world so much better, especially in terms of grief and love. Sharing the work makes me feel, above all, connected, but also seen and grateful. I learn so much by keeping it up. And I’ve always believed that if I could make one less person feel alone the way I felt so alone, then all of this was worth it.

What happened this year didn’t make me rich or famous. I didn’t even “go viral.” But one small positive spark led to another and another. It was unforgettable, and so very worth it.

Photo by Diego PH on Unsplash

One thought on “What makes this year unforgettable?”