One of the several writing-related blogs, newsletters and mailing lists I subscribe to sent me an email this week with the title, “Story Ideas from a Cat,” and I immediately thought, That’s so perfect for me, because I am a mini-crazy-cat-lady. My mother is the real deal, as she has seven or eight cats most of the time—depending on how she’s counting on the day you ask—so it’s kind of a genetic problem, but that’s another story. I have four cats. Plenty of material there.

This morning, I was sleeping soundly with my part-Bengal cat, Quincy, tucked warmly next to me on my right side, as usual. He’s the most Zen and genuinely nicest cat I’ve ever known, as he will sit placidly and observe the roaring vacuum cleaner with only mild curiosity while all the other animals in the house scatter like the sky is falling, and, importantly, he picks fights with no one ever. Even the always-happy white and black (not black and white) cat, Levon, who has the word “love” in his name somewhere, still picks on Jasper, the most senior cat, which makes him sound old or old-acting, which he isn’t—and doesn’t—at all. It’s just that he’s the most solitary, a loner even, and something about that annoys Levon the Lover, who truly loves everyone, even Jasper, except when he doesn’t.

Anyway, I woke up because the baby of the family, Desi, who is just two years old, was walking all over me (as he does in every possible literal and figurative way), purring his brains out, tickling my face with his whiskers, and shoveling his little fuzzy head under my hand, trying to force me into petting him, even in my unconscious state. Once conscious, even semi-so, I did my usual cranky shove and knocked him off the bed.

This technique is so completely ineffective that doing it in even a semi-unconscious state is fairly unforgivable. It’s like that definition of insanity everyone likes to repeat all the time—as if you needed someone to remind you that are making yourself crazy when it is perfectly clear—except when it isn’t. Desi is a lot like one of those inflatable doll things that stands up by force of a weight in its base and that, if punched, pops right back up over and over and over. It seems to me these dolls are always grinning in a kind of manic way too, just to be extra maddening. I realize this is sounding rather violent, and it really isn’t, but you don’t know Desi AKA Shit Burger, which is supposed to be a cute nickname, but really defines his personality in a way that his sophisticated moniker, Desmond, really can’t. 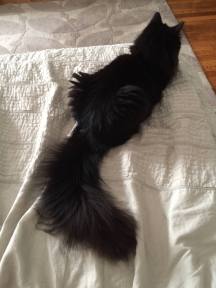 When I adopted him, his shelter name was Gator, a sign I chose to ignore. Instead, I focused on his gorgeous, jet-black mane, cartoonishly fluffy pantaloons, and tail so oversized that, attached to his otherwise stuntedly small body, makes him look a lot like a black squirrel. He’s a truly beautiful cat. Desi topped out at eight and a half pounds, so he’s what my husband and I call a “perma-kitten,” so light that he makes his big brothers seem enormous even though they are totally average. His feathery and feather-weight body make him incredibly tantalizing to hold and pet and kiss, which he then rewards with lightning-fast bites.

So I pushed him off the bed and he popped back up nearly instantaneously like one of those stupid grinning inflatable punching dolls, purring furiously and again pushing his small glamorously silky head under my trying-to-sleep hand. Because I never learn, I attempted one more sleep push. I’m sure you can’t imagine what happened.

Desi also lives to pick on Quincy, which is unacceptable for the aforementioned reasons, but it’s also completely predictable. So next, as part of the customary ritual, Desi started licking Quincy just long enough for Quincy to relax into thinking this might be a kind, brotherly gesture, despite the way these things always go, and then, like a cobra, Desi struck him with his perfect clean white fangs.

Cursing my superficial tendencies for the thousandth time, I got up and removed Desi from the bedroom and closed the door, still knowing, yet ignoring the knowledge, that this was a sheer temporary measure. Desi is like that person who keeps poking your leg over and saying, “Hey, hey, hey” over until you crack and yell, “WHAT??!”

After a short spell, where I began to drift back into a dream, I started to hear a little scratching and saw a plush black paw reaching under the door. Then it began in earnest: 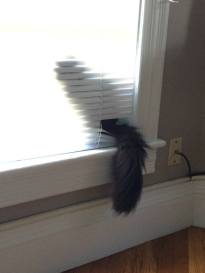 You can’t outlast Desi; he will always win. One time I tried to ignore him for almost an hour, during which I felt sure he would eventually pass out from his efforts. He meows with no pause. I don’t know when he even takes a breath. It’s quite something to behold.

There’s only so much ignoring a person has in them. I’ve tried. I’ve really tried. I’ve put in earplugs, smooshed a pillow onto my head, moved him to a downstairs room, put on white noise on my phone, given him a toy, food, catnip (foolishly). Everything short of a heavy-duty sedative. He is the definition of incorrigible.

One time, my mother told me she had mentioned Desi’s abundance of energy (isn’t that a nice way of putting it?) to her vet, who recommended that, in order to wear him out enough so that he was too tired to bother me, I get him ANOTHER KITTEN.

He got a robot playmate instead, recommended by MY VET, who does not cave in to that kind of crazy-cat-lady-stuff. It’s called a Froli-Cat and it shines red lasers in two directions that move in erratic half-circles while the inner workings of the machine grunt and whirl. Desi loved it at first, but we had to keep replacing the batteries because he would play so long that the damn robot got tired.

We blow catnip scented bubbles, pull around strings, give him plastic balls and bells and crumpled up foil, and pet the other cats a lot after Desi chases them down the stairs—and up the stairs—and down the stairs—and then pounces on them like a wild cheetah. He’s a pint-sized adversary. Any one of them could kick his furry butt, yet they don’t, and I do appreciate them for that. 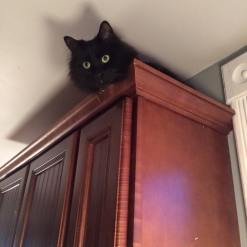 Desi jumps up onto the top of doors and cabinets, where he hangs out, leering at us in a superior way, from above. His giant green judging eyes are sometimes the only discernable feature. He loves to tightrope walk the banister above the stairs. He leaps over his brothers on the way to breakfast each morning like an acrobat. He’s bossy, he’s funny, he’s fearless, he’s got a violent streak. He’s not one of those cats that just sits in a sunny spot all day. He’s never dull.

I go back to the original email I received from one of those writerly, inspiring places, which I initially failed to read beyond the subject line, and realize that it says, “Sometimes the best way to get story ideas is to think from another point of view—like that of a cat. And there is no better way to get into the mind of your characters than to become like them.”

This assures me, for the millionth time, that I have no business writing from anyone’s point of view other than my own regardless of how desperate I am for a story idea. I am most definitely not going to walk on people, force them to pet me, and then bite them. That’s some kind of sick S & M stuff I want no part of.

One thought on “Story Ideas from a Cat”