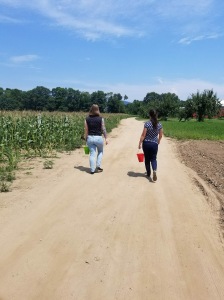 I’ve always felt it is harder to make friends as an adult.

Back when we were all in school, being shuffled into different classes and sports and performances and projects, we were forced to meet and interact with different people all the time. As grown-ups, a lot of long-lasting friendships have been forged, which is great. And sometimes we decide someone at work is worth socializing with, though crossing that boundary has burned me a couple of times, so I tend to be cautious in that area. I don’t attend church, which is where my dad tends to meet people. I don’t even get out to parties or concerts very much these days, being a grown-up with a lot of grown-up responsibilities and all.

But sometimes, I yearn for a new friend. Not because my current friends aren’t incredible. They are, and I don’t have enough time for them as it is. It’s just fun to get to know someone else now and then. It expands your perspectives; it turns you on to food or music or books you might not have discovered otherwise; it takes you new places. Dawn took me blueberry picking.

Dawn is technically a colleague, but in a separate department with an office several buildings away on the college campus where we work. Though I’m grateful our work overlapped on a project—otherwise, we might not have met—it helps that she isn’t a direct coworker in terms of the aforementioned concerns. But also, Dawn is just different. She’s got an authentic kind of warmth that made me trust her right away, and she exudes a spirit of joy that attracts me like an ant to sugar. It’s hard to explain.

So, one day at noon, we piled into her car with another pal of hers—in her own department, no less (she’s brave that way), and drove down the country roads nearby searching for the sign that had inspired the excursion.

We pulled into what looked like a residential driveway and parked near an open garage full of card tables covered with produce: blueberries, of course, but also corn and squash and cucumbers. A young woman asked how big a bucket we each wanted, showing us a couple of enormous ones, and we selected three colorful not-too-big plastic pails, the kind kids would take to the beach and use to build sandcastles. She directed us to the you-pick area: “Go past the red barn and down the dirt road until you see the caution tape.” It seemed straightforward enough.

We headed out and soon found ourselves at a fork. Within ten minutes and deep inside rows of corn with only mountains visible above them, we determined we had taken the wrong way. Under a cloudless early August sky, the sun pounded us, sweat began pooling under my work shirt and I thought sympathetically of migrant workers who would never consider what we were doing fun. But we laughed at our misstep while cursing the heat. As we looped around the field, we stumbled on a bunch of huge brown and black feathers, musing that they might be from turkeys and I tucked one into my ponytail, standing it up straight up like a Native American might have, to ward off insects or something. This could be all wrong, but I looked silly enough and so we continued to giggle while we wiped sweat from our foreheads and swung our buckets. While we considered the idea of being truly lost, we determined we had enough food to live here for quite some time and rather well. 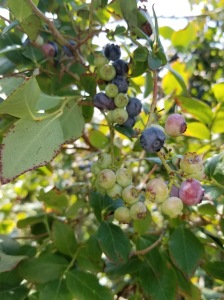 Eventually, we found ourselves among the right rows, and located the bushes that hadn’t already been picked over. We crouched low, attempting to shade ourselves behind bushes, complaining nearly constantly about how hot it was, grabbing the clusters of fruit down low, sifting through the pale green and pinkish berries to the deep purply ones with the slightly ashy-looking skins.

Wilting, we gave up fairly quickly. In the end, our buckets were only half-full, though I still think about just how many we must have eaten out there in the field—how many we ate that we technically should have paid for, but that were so essential just to get us through the task during our lunch break. And how much fun it was to pop them in our mouths. Just off the plant with juices warmed by the sun, the berries were so stunningly delicious.

In the end, the most anyone paid for their haul was four dollars, though I felt the journey alone was worth a lot more. We jumped back into Dawn’s car and headed back to our offices, delightfully anticipating the cold of the air conditioning, our palms stained with purply dots.

Grateful, I had felt like a kid for the first time in a long time, playing a tiny bit of hooky, with new friends on a small adventure, getting a little dirty, having a lot of fun.